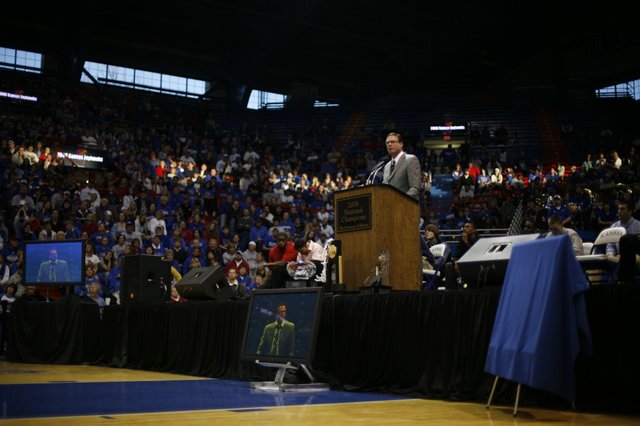 Allen Fieldhouse doors will swing open at 5:30 p.m., Oct. 17 for Kansas University's season-opening Late Night in the Phog. The program, which will include men's and women's basketball skits and scrimmages, will start at 6:45 p.m., and conclude around 9:30 p.m., KU associate athletic director Jim Marchiony said Thursday. It will be televised by Metro Sports with portions shown by ESPNU.

Bill Self and his wife, Cindy, hopped out of a light blue Corvette convertible after the 21â2-mile ride of their lives - down Massachusetts Street, 19th Street and Naismith Drive, with 80,000 or so fans cheering them the whole way. "We're floating on air right now," Self, Kansas University's fifth-year basketball coach, said upon conclusion of a Sunday afternoon parade honoring the NCAA basketball champions.