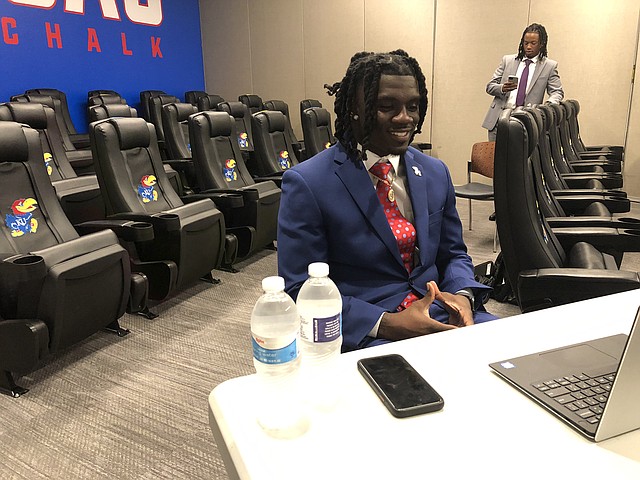 Kansas defensive back Kenny Logan Jr., conducts a Zoom interview for Big 12 Media Days from inside KU's team facilities as teammate Kwamie Lassiter II waits in the background. The two, along with head coach Lance Leipold and KU Athletic Director Travis Goff, were supposed to be in Dallas with the rest of the Big 12 contingent on Thursday, but bad weather led to the cancellation of their flight.

Back home in St. Augustine, Fla., over the Independence Day holiday weekend for a brief getaway from the grind of Kansas football’s summer workouts, veteran defensive back Kenny Logan Jr. made sure to stay in touch with someone whom he met only a couple of months earlier. Sure, Logan was on vacation. But that didn’t mean he was going to stop texting — or even FaceTiming — with head coach Lance Leipold.

Up early and dressed to the nines by 6 a.m., Kansas football players Kwamie Lassiter II and Kenny Logan Jr. spent the rest of Thursday lounging in the team facility in their suits instead of representing the program at Big 12 Media Days in Dallas. By Matt Tait