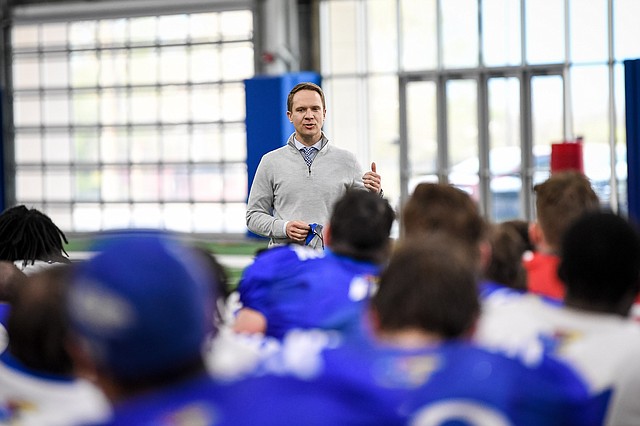 Twenty-nine days after the NCAA’s new name, image and likeness rule went into effect, the University of Kansas launched a four-tiered policy on how to navigate the new era of college athletics. By Matt Tait

As the University of Kansas athletic department continues to move forward into post-pandemic operations, the Kansas Athletics, Inc., Board of Directors on Monday unanimously approved a $100 million budget for Fiscal Year 2022, which runs from July 1, 2021 through June 30, 2022. By Matt Tait

Reports: KU narrowing in on its next football coach

The Kansas football program might have a new head coach lined up by the time the Jayhawks kick off their spring game on Saturday night.

A national search for the next head football coach at the University of Kansas is back on — this time with a different athletic director in charge. Still in his second week on the job as KU’s new AD, Travis Goff announced in a letter emailed to donors Thursday evening that he is initiating a national search to find a permanent replacement for Les Miles.

New University of Kansas Athletic Director Travis Goff made his second appearance at a KU football practice on just his third day on the job Thursday. And this time Goff addressed the players to conclude his visit.