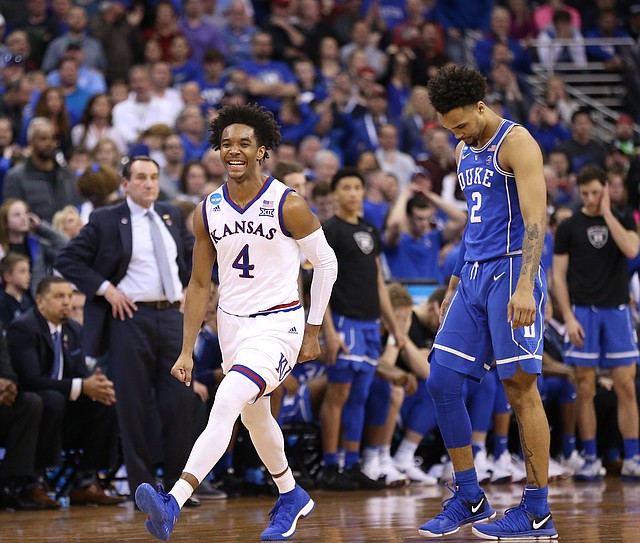 2017-18 – With Big 12 Player of the Year Devonte' Graham teaming with fellow senior Svi Mykhailiuk to lead another thin Kansas squad, the Jayhawks won an NCAA-record 14th consecutive Big 12 regular season title and rumbled their way to the program’s first trip to the Final Four since 2012 behind some hot shooting and clutch play. After surviving No. 16 seed Penn and Seton Hall in Wichita, the Jayhawks topped Clemson in the Sweet 16 in Omaha, Neb., before knocking of No. 2 seed Duke in an overtime classic to reach the Final Four. Transfer Malik Newman, who was red hot throughout the postseason scored all 13 KU points in OT, which was needed because of Newman’s defense on Duke star Grayson Allen on the final possession of regulation. Back in San Antonio for the Final Four with dreams of repeating the feat from 10 years earlier, the Jayhawks ran into a buzzsaw in the national semifinals, losing to eventual national champion Villanova, which hit 18 3-pointers in a 91-79 win, including an NCAA record 13 in the first half. KU finished the season 31-8.