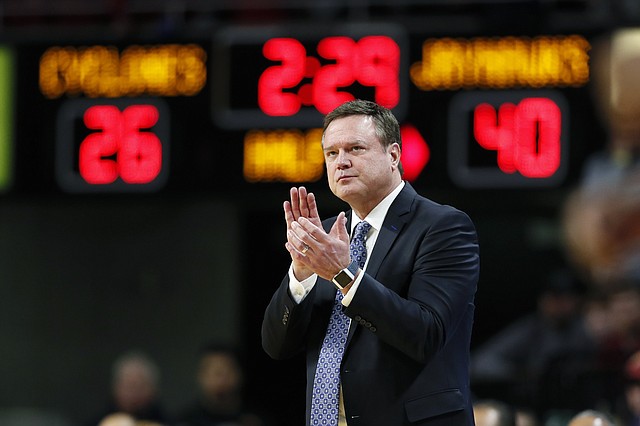 Kansas coach Bill Self applauds his team during the first half of an NCAA college basketball game against Iowa State, Wednesday, Jan. 8, 2020, in Ames, Iowa. (AP Photo/Charlie Neibergall)

Two areas of weakness for the 2019-20 Kansas men’s basketball team figure to be much improved during the 2020-21 season, KU coach Bill Self said recently. By Matt Tait

During a conference call with reporters Monday afternoon, Kansas coach Bill Self said from his home in Lawrence that his players believed they were “built” to make a run to a national title. By Matt Tait

Notebook: KU coach Bill Self focused on recruiting impact of games being on ESPN+

Ames, Iowa — Kansas basketball coach Bill Self does not have ESPN+ and is not afraid to tell you that he doesn’t really know how to get it.