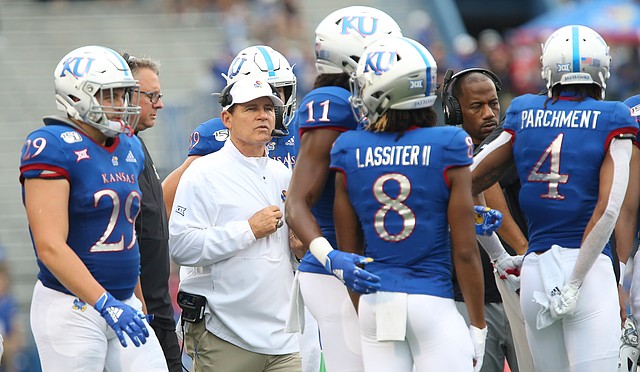 Kansas head coach Les Miles heads into the huddle with his team during the third quarter on Saturday, Sept. 21, 2019 at David Booth Kansas Memorial Stadium.

If the Jayhawks have any obvious advantage in their Big 12 opener this season it’s that they’ve already played a game and know what issues need to be addressed, while Baylor hasn’t.

KU’s athletic director says the university is already talking about contingency plans in case the coronavirus pandemic that canceled the NCAA’s winter and spring championships affects the 2020 football season, too. By Benton Smith

Give Kansas football coach Les Miles credit for making the difficult move to part ways with offensive coordinator Les Koenning. Now for the easy part — slide out of the way and let Brent Dearmon do his thing. By Matt Tait

If Les Miles has a specific No. 2 quarterback on his depth chart — and if that player is his oldest son, Manny Miles — the Kansas football coach is keeping that information within the walls of the team’s facility. By Benton Smith

The desperation play that ended 12 yards shy of the end zone could have given the downtrodden Kansas football program a victory in its Big 12 opener.