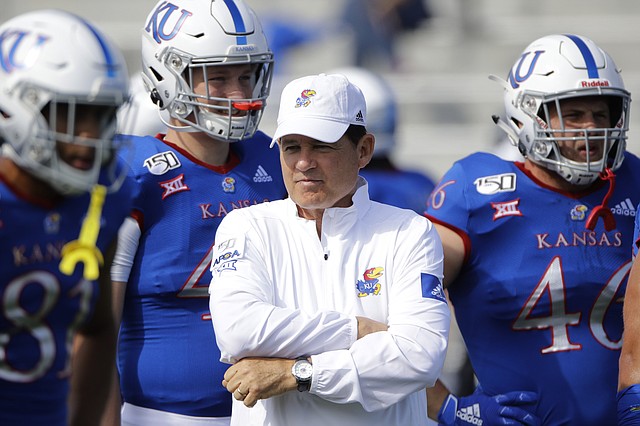 Reports: Les Miles accused of sexual harassment while at LSU; reached settlement with an LSU student

Now the head football coach at the University of Kansas, Les Miles during his tenure at LSU faced allegations of sexual harassment and reached a settlement with one former student intern, according to reports that surfaced on Wednesday.

While Kansas football coach Les Miles feels upbeat about the entirety of the Jayhawks’ latest signing class, he couldn’t downplay the significance of topping it off on National Signing Day with the addition of four-star receiver Quaydarius Davis.

No college football matchup in 2020 is a certainty, but this week’s Kansas football game at Baylor feels more in limbo than most, with the Bears having to call off what would have been their season opener versus Houston this past weekend.

Only first 2 years are guaranteed

Each of the three newest assistant coaches hired earlier this year to join Les Miles’ University of Kansas football staff signed a six-year contract, with only the first two years guaranteed.

With the Kansas football team’s 2020 signing class finally complete, head coach Les Miles looked at the long list of high school players he and his assistants spent the past year recruiting and didn’t mind sharing his sense of satisfaction. “This has been,” Miles said during a Thursday press conference, while knocking his fist on the wooden lectern in front of him, “the kind of class that we needed.” By Benton Smith