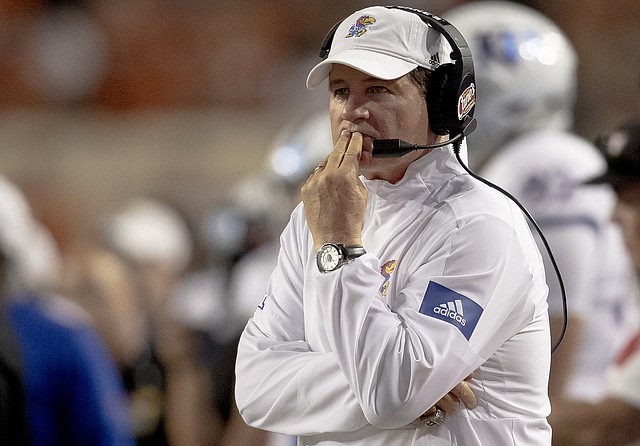 University of Kansas football coach Les Miles’ lawyer is now calling for the release of a 2013 investigative report on allegations of Miles sexually harassing LSU student workers when he was the coach in Baton Rouge, La.

Now that we know that KU offensive coordinator Brent Dearmon is leaving the program, it’s imperative that the Kansas administration moves as quickly as possible in finding his replacement. By Matt Tait

Kansas football coach Les Miles believes there will be college football this fall. By Matt Tait

Beaty's lawyers press KU AD about Miles' use of noncoaches

Lawyers for former Kansas football coach David Beaty are zeroing in on the university’s treatment of allegations against Les Miles — allegations that they say are just as serious as the ones that the university is using to justify not paying Beaty a $3 million buyout.

Follow along for recruiting updates with our crew and the KUsports.com community.

Usually understated during his weekly press conferences, Kansas football coach Les Miles heard something Monday afternoon that stirred him to exuberance. The subject material didn’t have anything to do with the Jayhawks’ performance this past weekend at Texas, either. Rather it was a matter of a procedural oversight on that Saturday night stage that appeared to go UT’s way. By Benton Smith