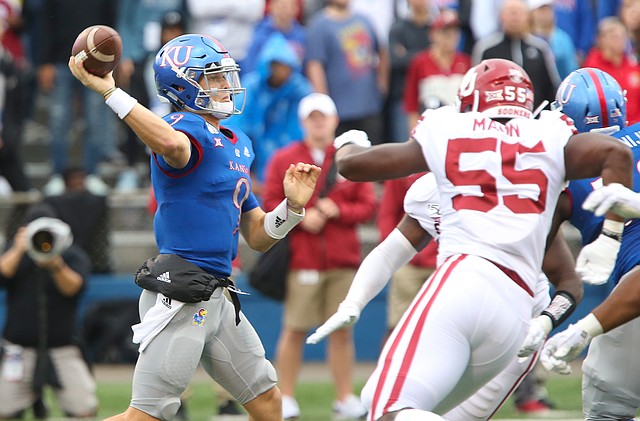 Stanley, Moragne and Cole to represent KU at Tropical Bowl

The long and difficult path to a professional football career is taking three former Kansas football players to Florida this weekend, for the SPIRAL Tropical Bowl.

Compared to some recent Kansas football teams, the 2019 Jayhawks had a relatively successful offense. For instance, KU’s 377.3 total yards per game marked the program’s best average in that category since the final season of head coach Mark Mangino and quarterback Todd Reesing, in 2009. However, compared to the rest of the FBS teams this year, statistics show that KU still has miles of ground to make up offensively. By Benton Smith

New offensive coordinator Brent Dearmon, according to the players learning from him, is an endless fountain of energy. The Jayhawks will need to tap into some of Dearmon’s get-up-and-go early this week to set themselves up for a successful rivalry game. By Benton Smith

Carter Stanley doesn’t consider himself a skilled basketball player. The senior Kansas quarterback has spent most of his time since about eighth grade focusing his athletic conquests on football, after all. During the past week, though, when Stanley runs the Jayhawks’ offense in practices, under the guidance of new coordinator Brent Dearmon, the QB can picture himself as a distributor on the hardwood. By Benton Smith