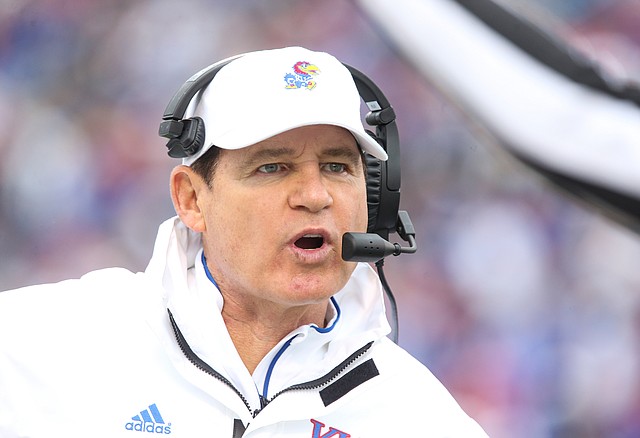 Kansas head coach Les Miles gets the attention of an official during the second quarter on Saturday, Oct. 5, 2019 at Memorial Stadium.

Les Miles looking forward to returning to OSU, where he first became a head coach

It was 15 years ago Wednesday that Les Miles last was inside Boone Pickens Stadium, in Stillwater, Okla., for a college football game. On that mid-November Saturday back in 2004, Miles led the Oklahoma State football team, ranked No. 25 in the country, onto the field. He’ll return, of course, this coming Saturday, in charge of the Kansas Jayhawks this time, and looking to knock off the No. 25-ranked Cowboys. By Benton Smith

With it being the bye week, Kansas head coach Les Miles does not have his usual weekly press conference. That means the Big 12 conference call is the only time that Miles will speak this week, which took place one day after he announced a change at offensive coordinator.

Following a 45-20 loss to No. 6 Oklahoma, Kansas football coach Les Miles had no interest in revisiting the departure of former senior running back Khalil Herbert.