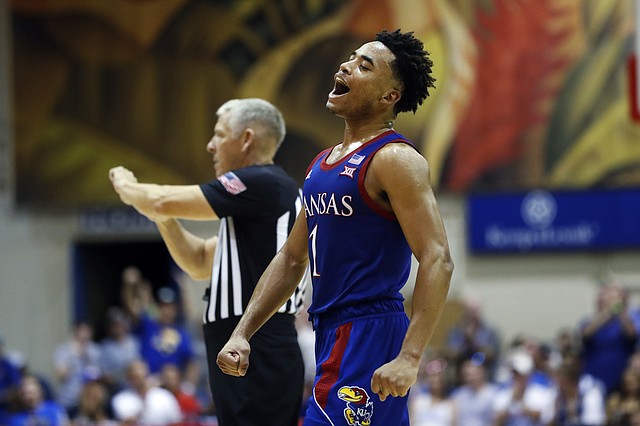 Kansas guard Devon Dotson (1) reacts to play during a timeout against BYU during the second half of an NCAA college basketball game, Tuesday, Nov. 26, 2019, in Lahaina, Hawaii. (AP Photo/Marco Garcia)

Sophomore point guard Devon Dotson’s status for Saturday’s 1 p.m. game at Texas remains uncertain, but Kansas coach Bill Self is not planning to overhaul KU’s approach regardless of the outcome. By Matt Tait

It was as if they had rehearsed it. After two dribbles, two steps and the biggest rumbling the island of Maui has heard since its last severe thunderstorm, Kansas big man Udoka Azubuike threw down the dunk of the tournament to date during the fourth-ranked Jayhawks’ 71-56 semifinal win over BYU at the Maui Invitational. By Matt Tait