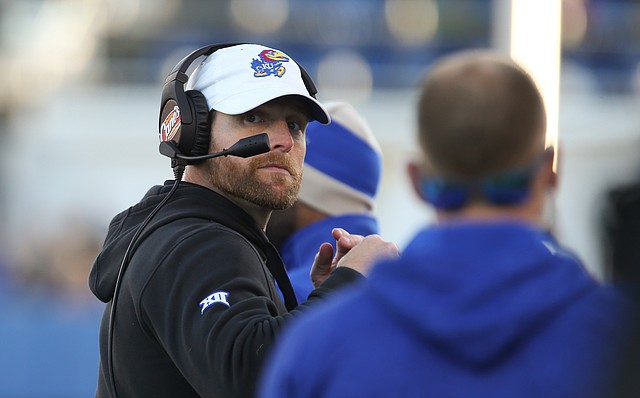 Kansas offensive coordinator Brent Dearmon turns over his shoulder as he looks down the sideline during the fourth quarter on Saturday, Nov. 2, 2019 at Memorial Stadium.

A little more than two years into his time as the head football coach at Kansas, Les Miles will have to find his fourth offensive coordinator.

Both this week and last Kansas football coach Les Miles discussed his team’s preseason quarterback competition. And on each occasion Miles began the chats by voicing his trust in offensive coordinator Brent Dearmon’s leadership and process with the matter.

Though obviously enthused this week by the signing of a dual-threat quarterback in the Kansas football program’s 2020 recruiting class, offensive coordinator Brent Dearmon isn’t the type to expect incoming freshman Jalon Daniels to show up in Lawrence as some kind of preordained starter. By Benton Smith

Bye weeks usually involve plenty of reflection for most football teams, so the Kansas Jayhawks’ most recent stretch of down time wasn’t unique in that regard. But the KU offense had so underperformed its expectations in its most recent loss that a hard, long look in the mirror basically became a priority. By Benton Smith