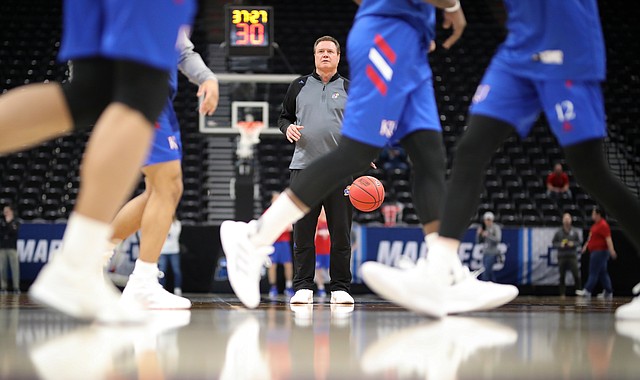 A recent conversation with an old friend sparked an idea that could change the typical flow of the preseason for Kansas basketball coach Bill Self and the Jayhawks. By Matt Tait

Jayhawks not planning anything unusual despite late start to summer workouts

Kansas basketball coach Bill Self does not believe that the delays brought about by the COVID-19 pandemic have forced him into pushing his team more at the start of workouts this week. By Matt Tait

Although Late Night and the season opener remain in the distance, the start of another school year marks the unofficial beginning of a new journey for the Kansas men’s basketball program. And what a journey it’s been already. By Matt Tait

Count Kansas basketball coach Bill Self in the group of people unsure of whether KU will be one of the programs receiving a Notice of Allegations from the NCAA later this summer. By Matt Tait

Matt Tait: With Coach Cal in for life at Kentucky, will Kansas, others follow suit?

So John Calipari is now at Kentucky for life and the whole thing got me wondering if this kind of contract extension is going to become more popular in the coming years. By Matt Tait

Game Day Breakdown: No. 4 seed Kansas vs. No. 5 seed Auburn

A look at some of the keys for 4th-seeded Kansas in tonight's second-round NCAA Tournament clash with No. 5 seed Auburn at Vivint Smart Home Arena in Salt Lake City, Utah. By Matt Tait