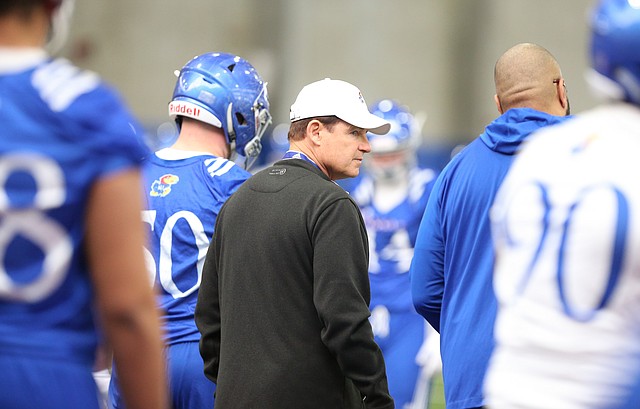 The Kansas football program is suddenly without an opponent for the first week of the 2020 season, as the University of New Hampshire announced Friday that none of its fall sports teams would play this year.

When Jeff Hecklinski left the Kansas football staff to become the offensive coordinator at San Diego State, head coach Les Miles decided to promote the departing assistant’s replacement from within.

'We just have to prove them wrong': Jayhawks not concerned by preseason expectations

It was expected, but that doesn’t necessarily mean it was easy to see. For the ninth year in a row, the Kansas football team was picked to finish last in the Big 12 conference in the preseason poll as voted on by media members.

Les Miles' track record vs. top 25 teams far better than what KU football is used to

Over the course of 15-plus seasons as a college football head coach, Miles’ teams have gone 45-33 against top 25 opponents. Miles enters his first season at KU with 197 games behind him, and roughly 40 percent of them came with his teams going up against ranked competition. By Benton Smith

“You should see how we recruit. We recruit like we make a game plan,” Les Miles said. The approach implemented by Miles and his staff must be doing the trick, given the success of this past weekend, when eight new prospects verbally committed to KU’s 2020 recruiting class. By Benton Smith

Since its inception in 2018, college football’s transfer portal has yet to lure any of the University of Kansas football program’s prominent players away from Lawrence with the idea of playing somewhere else, where the grass or artificial turf is greener. Even so, the Jayhawks’ head coach, Les Miles, didn’t come across as a supporter of the portal’s existence this week. By Benton Smtih

Les Miles isn’t particularly interested these days in sharing vivid details of what goes on during his Kansas football team’s spring practices. But during a brief session with media members on Tuesday evening, KU’s head coach provided some particulars of the format fans can expect for the spring game on Saturday night at David Booth Kansas Memorial Stadium. By Benton Smith