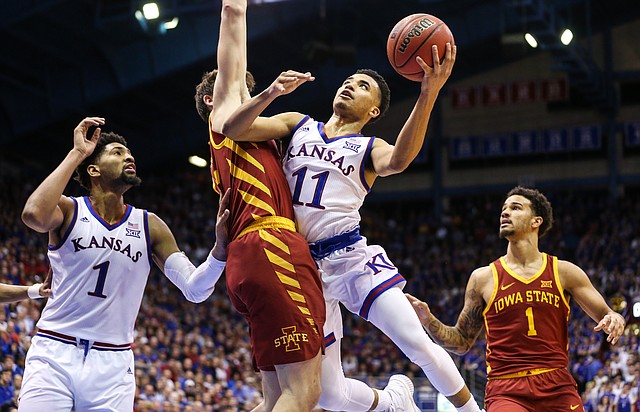 Kansas guard Devon Dotson (11) swoops in to the bucket against Iowa State forward Michael Jacobson (12) during the second half, Monday, Jan. 21, 2019 at Allen Fieldhouse.

Consider Devon Dotson’s decision to declare for the 2019 NBA Draft “an information-seeking quest.” That was the way Dotson’s father, Dana Dotson, described the move in a Friday phone call with the Journal-World a few hours after Dotson announced his intentions on Twitter. By Matt Tait

He has just 19 college basketball games under his belt to date, but last Saturday’s 65-64 loss at West Virginia was one of Kansas freshman Devon Dotson’s worst. It also was played a huge role in his masterful game against Iowa State on Monday night at Allen Fieldhouse. By Matt Tait