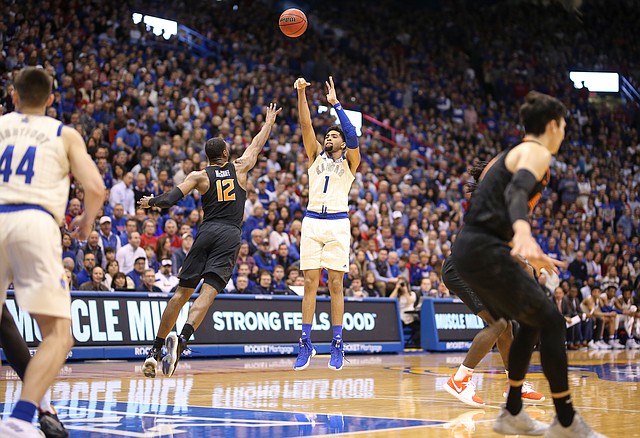 Kansas forward Dedric Lawson (1) puts up a three over Oklahoma State forward Cameron McGriff (12) during the first half, Saturday, Feb. 9, 2019 at Allen Fieldhouse.

After earning Big 12 Newcomer of the Year and All-American honors for averaging a double-double during his first season with the Jayhawks, Dedric Lawson spent the past six weeks in Los Angeles working on his game and body to position himself to show that he belongs in the first round. By Matt Tait

In the running for Big 12 player of the year after posting 20 double-doubles during his first season with the Jayhawks, Kansas junior Dedric Lawson had to settle for being named the Big 12 Newcomer of the Year on Sunday. Lawson also earned a first-team all-Big 12 nod in the awards voted on by the Big 12 coaches. By Matt Tait