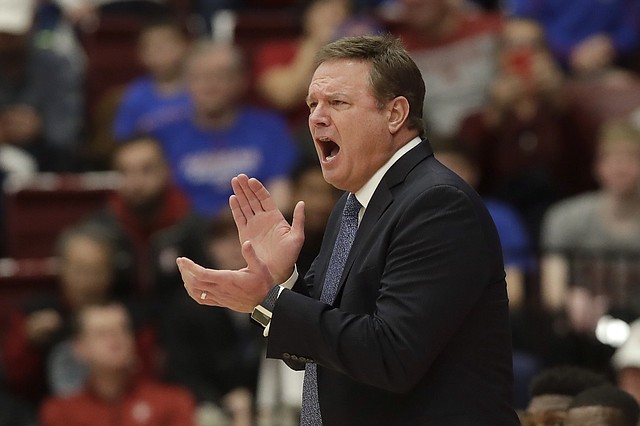 Kansas head coach Bill Self yells during the first half of an NCAA college basketball game against Stanford in Stanford, Calif., Sunday, Dec. 29, 2019. (AP Photo/Jeff Chiu)

Kansas basketball coach Bill Self deems Jayhawks ready for the next step, but not necessarily for a game yet

With Late Night looming and the first official practice of the 2021-22 Kansas basketball season slated for Wednesday, KU coach Bill Self is moving at a slightly different pace than normal. By Matt Tait

The head coach of the University of Kansas athletics department’s flagship program, Bill Self, who has lived and worked in Lawrence for nearly 18 years now, considers the Jayhawks “fortunate” to have Travis Goff as the new athletic director.

Devon Dotson’s latest interview session with the media proved eye-opening on Thursday, when the Kansas sophomore point guard fielded a question about his head coach. It was in that moment Dotson learned the Jayhawks’ next victory will give Bill Self 700 career wins. By Benton Smith

Topeka — Roughly 19 hours later than they were supposed to arrive, the Kansas Jayhawks finally made it back to Kansas just after 6 p.m. Monday. By Matt Tait