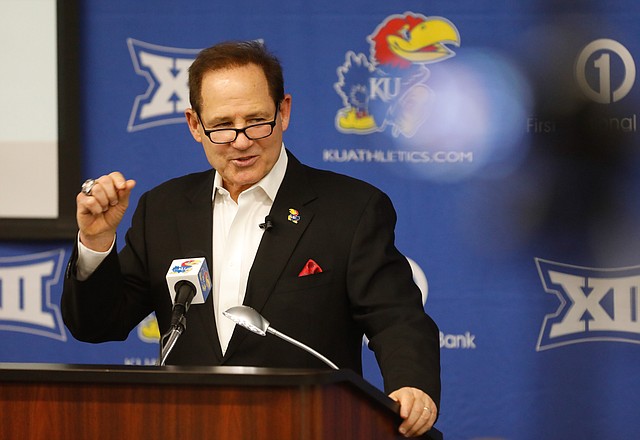 In just a few weeks, Kansas football coach Les Miles will be allowed to go into greater details about some members of his third KU recruiting class, once they sign and make their pledges official. But Miles didn’t mind sharing his anticipation regarding what’s to come with the Class of 2021 during his “Hawk Talk” radio show on Wednesday night.

There’s a reason the Kansas football program continues stockpiling Class of 2021 recruits amidst a pandemic that keeps the coaches from visiting with prospects in person. When head coach Les Miles and his assistants are able to meet with a player and his family via video calls, a virtual tour and meeting can almost be as good as the real thing, according to KU’s recruiting coordinator and tight ends coach, Josh Eargle.

Like college coaches in every sport throughout the country, the Kansas football staff quickly figured out in the past week or so that all of its recruiting plans for the immediate future would have to be scrapped. Instead of holding back, the Jayhawks pivoted and innovated. By Benton Smith

With most of their 2020 recruiting class sorted out in December, Kansas football head coach Les Miles and his assistants just have a few loose ends to tie up on Wednesday for National Signing Day. The Jayhawks could add somewhere around four to six new additions to fill out the class, after announcing the signing of 19 high school seniors during the early signing period. By Benton Smith

'They're pretty special': KU football has high hopes for 2020 cornerbacks

There’s still some work to do for Kansas football coach Les Miles and his staff when it comes to completing their 2020 recruiting class, but by Wednesday’s end the coaches didn’t only have much of that labor out of the way, they also added a quarterback to the mix. By Benton Smith