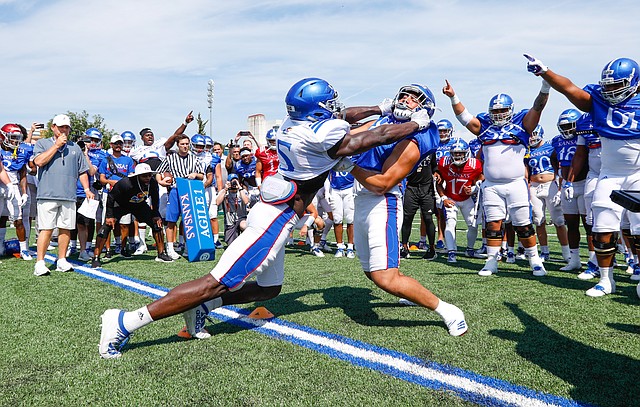 It is no secret that the tight end position has changed at nearly every level of football.

Dating back to the spring and continuing on through the summer and into preseason camp, first-year Kansas football coach Les Miles has leaned into letting those who are listening know that he feels positive about his new team. So much so that it almost seemed out of character on Friday at KU’s media day when Miles referenced some shortcomings while answering questions about the team’s goals. By Benton Smith

Rushing the passer isn’t literally the only thing Azur Kamara ever is asked to do from the edge. Much of his individual progress this past offseason, as he worked toward playing a much larger role for KU in 2019, came in the way he adapted. By Benton Smith

It’s a daily conversation between Les Miles and his coaching staff, but there’s no tag line or marketing ploy associated with it. It’s just good, old-fashioned evaluation, and it’s just as important today as it was on Day 1 of preseason camp and as it will be on the final Friday before the season opener, which is now just 19 days away. By Matt Tait