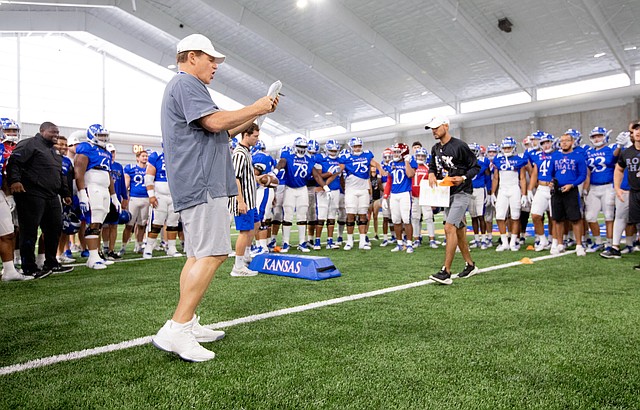 After the pandemic wiped out spring practice for most major college football teams, an NCAA plan to extend the preseason by two weeks could help coaches and players make up for the lost time.

The raw, unedited footage of the “Miles to Go” documentary that profiled coach Les Miles’ first season at the helm of KU football can be subpoenaed and used as evidence in the case of former coach David Beaty’s disputed firing, a U.S. magistrate judge ruled Tuesday. By Conner Mitchell

The NCAA has amended the Notice of Allegations it first sent the University of Kansas a little more than four months ago, a result of KU self-reporting a minor violation committed by the KU football program.

With three weeks left before he leads the Kansas football team onto the field for a game for the first time, Les Miles and his assistants spent much of Saturday’s practice in scrimmage mode, trying to gauge how far away the Jayhawks are from being ready for the season. By Benton Smith