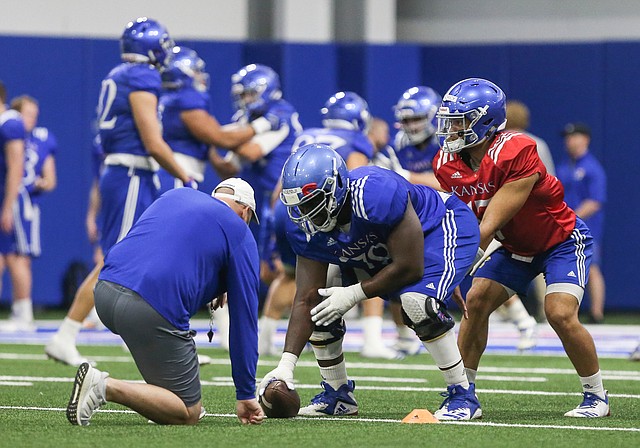 Kansas offensive line coach Luke Meadows gets down as he works with lineman Hakeem Adeniji as he snaps to quarterback Miles Kendrick on Thursday, April 4, 2019 at the indoor practice facility.

Kansas football players are facing many unknowns as the COVID-19 pandemic looms over the season, but one bit of uncertainty is all too familiar to the Jayhawks: the quarterback competition. By Benton Smith

It was as good of a time as any for Hakeem Adeniji to reflect on his collegiate debut. At Big 12 Media Days, which took place at AT&T Stadium in Arlington, Texas a little over a month before his senior season, the Kansas offensive lineman took a trip down memory lane. Adeniji can now laugh about his Jayhawk debut as a true freshman, even though he was startled at the time. Shane Jackson