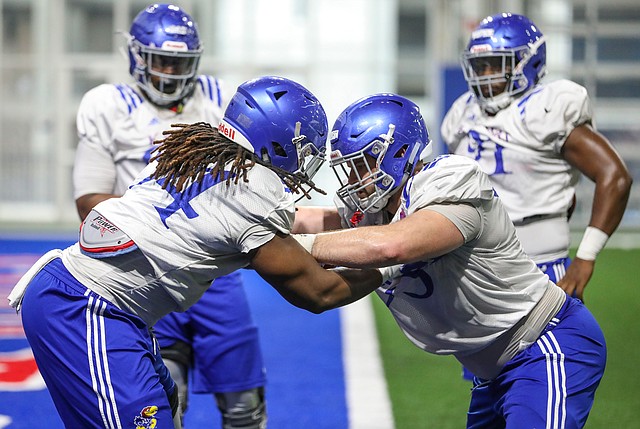 Kansas senior defensive lineman Sam Burt summed up one of the many drawbacks of playing football during the COVID-19 crisis succinctly. “It stinks,” Burt began, while describing what it will be like for the Jayhawks to open their season without any fans in attendance.

A homegrown University of Kansas junior from the small city of Abilene, Sam Burt is no longer a walk-on with the Jayhawks’ football program. By Benton Smith

When the Kansas football team makes its debut under head coach Les Miles on Aug. 31, the players who end up starting within the defensive front won’t exactly enter the opener with name recognition. By Benton Smith

Notebook: Jayhawks thin up front on defense this spring

College football roster numbers are always at their thinnest in the spring, when the previous season’s seniors are no longer involved and most members of a given program’s recent signing class have yet to arrive on campus. At University of Kansas practices these past few weeks, the lack of bodies is most evident up front on KU’s defense. By Benton Smith