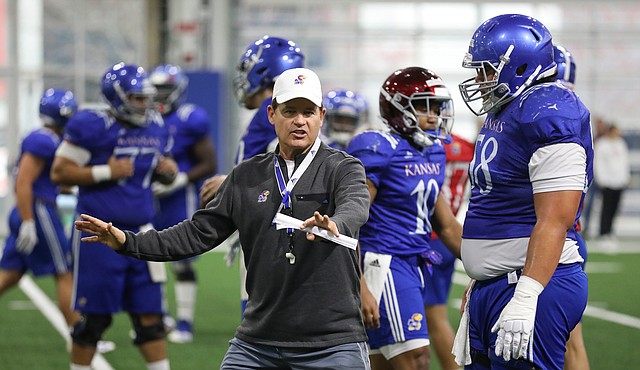 The way Les Miles envisions their futures, several freshmen on the Kansas football roster should be far ahead of schedule by the time the 2020 season arrives. Six members of the Jayhawks’ latest signing class already are enrolled, attending KU classes and getting acclimated when they could still be seniors in high school. By Benton Smith

During the buildup to his first game as the head football coach at the University of Kansas, Les Miles at times went out of his way during press conferences and interviews to let people know how optimistic he felt about the Jayhawks’ offensive line. Two games into the season, though, the play up front has neither wowed most observers nor overwhelmed opposing defensive linemen and linebackers. By Benton Smith

Much like any other preseason, the starting quarterback competition has been well-documented ahead of Les Miles’ first year with the Kansas football team. Yet the battle to be the player snapping him the ball has flown under-the-radar. Shane Jackson

Early preseason impressions don’t win college football games, but the ones made by Kansas football players on their head coach this week seemed to reveal that the Jayhawks opened camp right on track. By Benton Smith

Jayhawks ready for 'anything' in first preseason camp under Les Miles

The Kansas football team’s veterans feel at this point like they know head coach Les Miles relatively well, after spending eight months around the man who was hired to turn around the program. That doesn’t necessarily mean, though, that they have a strong sense of what awaits them at their first preseason camp with Miles in charge. By Benton Smith

Though it may have seemed from the outside that the Kansas football program’s spring schedule culminated with this past Saturday night’s scrimmage, what with approximately 70 recruits in attendance and a Rick Ross performance capping the evening, Les Miles’ team wasn’t done with spring football quite yet. By Benton Smith

Anyone interested in getting a peek at the early stages of Les Miles’ overhaul of the KU football program has the chance to do so at Saturday night’s spring game. By Benton Smith