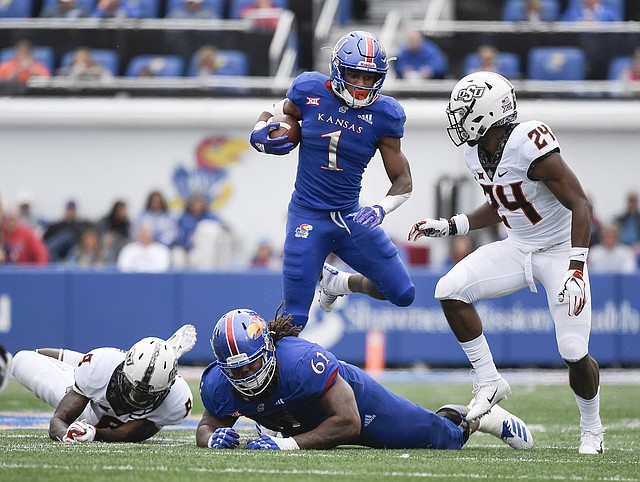 Kansas running back Pooka Williams Jr. jumps over a teammate to gain more yards against Oklahoma State on Saturday, Sept. 29, 2018.

It didn’t take long Monday morning at Big 12 Media Days for Kansas football coach Les Miles to address the recently announced one-game suspension for high profile running back Pooka Williams, which was met on social media and other platforms with some backlash. By Benton Smith

University of Kansas football player Pooka Williams allegedly punched a woman in the stomach in an incident that led to his arrest on suspicion of domestic battery earlier this month, according to a Douglas County District Court affidavit obtained by the Journal-World on Thursday. By Dylan Lysen

Kansas has the better basketball program, Kansas State the superior football team. It’s been that way nearly every year for more than a quarter of a century.

Next season will feature 2 bye weeks

What exactly the Kansas football team’s lineups and coaching staff will look like by the time the 2019 season gets here is anyone’s guess at this point. As of Thursday, though, with the Big 12 unveiling next year's football schedule, we now all know the dates on which the Jayhawks will be playing on the forthcoming calendar. By Benton Smith

Another strong showing by running back Pooka Williams landed the University of Kansas freshman his second weekly Big 12 award in four games. By Benton Smith