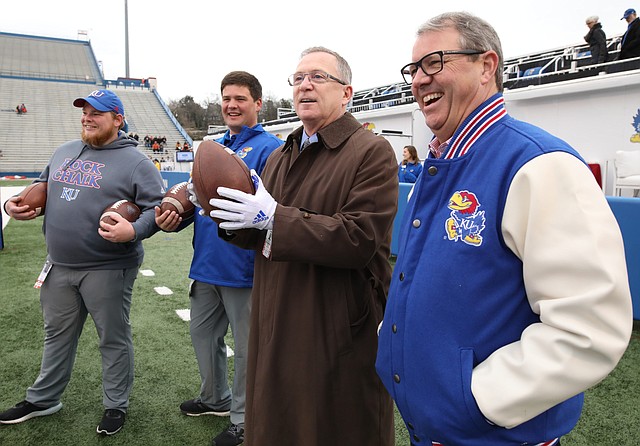 KU has lost a ruling in its NCAA infractions case related to evidence involving its former football coach, and the ruling ultimately may play a role in the higher-stakes case against the men’s basketball program.

In evaluating the first season of the Les Miles era at the University of Kansas, the man who hired Miles, Athletic Director Jeff Long, hesitated to call the 2019 season an outright success. And even though Long might be openly overzealous with his verbalized expectations that KU win every game, he described the just completed 3-9 year as a step in the right direction. By Benton Smith

KU chancellor: Legislation not the best way to change NCAA rules on pay for athletes

State and federal law is not the best way to change NCAA regulations regarding athletes receiving compensation through endorsements, University of Kansas Chancellor Douglas Girod said.

An idea pushed this past spring by University of Kansas Athletic Director Jeff Long, which would allow a football program to sign as many as 35 players in one recruiting class and 50 over a two-year period, may be picking up some steam nationally. By Benton Smith

A hopeful Jeff Long is putting in the legwork needed to try and speak a major college football change into existence. By Benton Smith

'Hawk Talk' with AD Jeff Long to debut this week