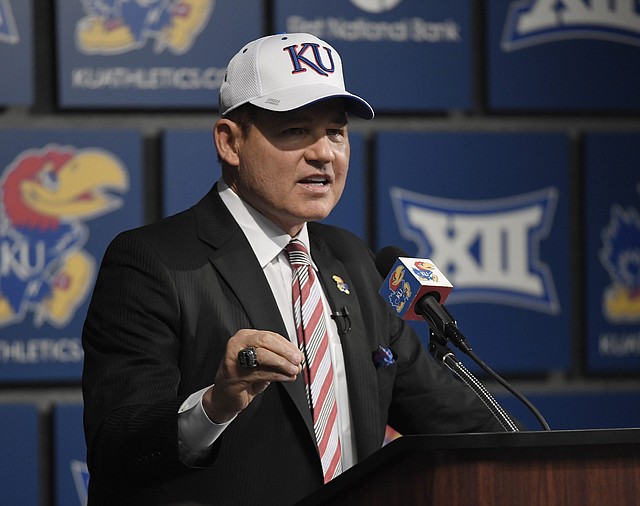 As new Kansas football coach Les Miles looks to fill the recently vacated offensive coordinator spot on his full-time coaching staff, Miles announced Friday the hiring of a pair of support staffers who used to work for SEC programs.

Les Miles: KU played 'catch-up' in recruiting once he took over

On the day Les Miles was introduced as the Kansas football program’s next head coach, back on Nov. 18, Miles said hiring coordinators and position coaches would be a key step in the recruiting process, because those new staff members would be able to lay out their plans and deliver their pitches to prospects. That bit of foreshadowing from the former LSU head coach, who inherited a 2019 KU recruiting class with just one player committed, proved true. By Benton Smith

As Les Miles looks ahead to Year 1 of the massive rebuilding project he agreed to take on when he signed a five-year contract to coach the Kansas football team, Miles doesn’t appear to be a man ready to temper his expectations. By Benton Smith

As Les Miles officially made his return to college football Sunday, when Kansas named him its next head coach, Miles insisted during his introductory press conference his time away from the sidelines included plenty of reflection about how his old LSU offenses operated. By Benton Smith

A funny thing happened on the way to hiring Les Miles. The outgoing Kansas football staff left him just one committed player in the 2019 class. And it might have been the best thing that ever could have happened. By Matt Tait

Les Miles is the new head football coach and Kansas and all anyone wants to talk about is if the partnership between the national champion known as “The Mad Hatter” and one of the longest suffering college programs in NCAA history is going to work. By Matt Tait