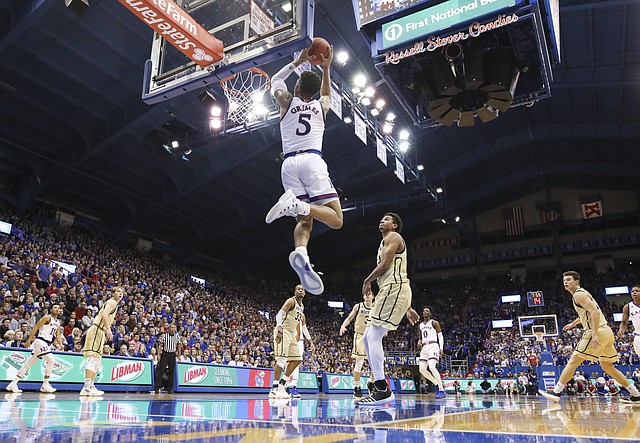 Kansas guard Quentin Grimes (5) gets up for a lob jame against Wofford during the second half on Tuesday, Dec. 4, 2018 at Allen Fieldhouse.

A look at some of the keys for 13th-ranked Kansas in today's Big 12 battle with Oklahoma State at Allen Fieldhouse. The last time these two hooked up on KU's home court, the Cowboys walked away with an upset victory. By Matt Tait

KU remains confident freshman Quentin Grimes will get back on track

Kansas coach Bill Self made sure to give a message to one player in particular. Freshman Quentin Grimes played a season-low 14 minutes during KU’s 74-71 win over Villanova Saturday afternoon in Allen Fieldhouse. It marked the third time in the last four contests that Grimes has logged less than 19 minutes.