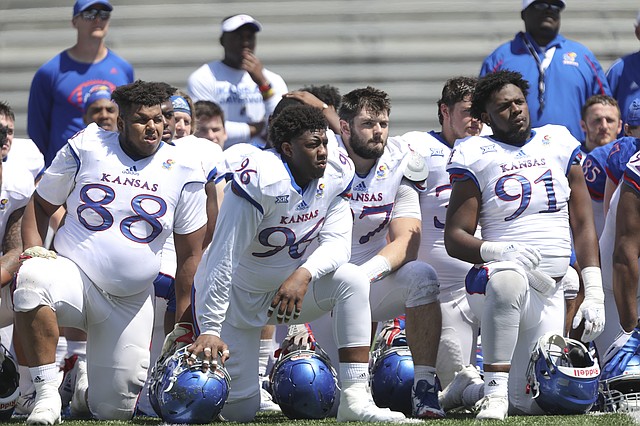 This past weekend proved to be the breaking point for the David Beaty era at the University of Kansas. It wasn’t the first time this season, though, that KU football players dealt with uncertainty regarding the coaching situation on a Saturday night or Sunday morning, in the wake of a defeat. By Benton Smith

KU in search of consistency from complementary D-linemen

Popular opinion might state that most of the Kansas football team’s defensive linemen are unproven. The foremost member of the position group happens to see it differently. By Benton Smith

Only a few months remain in Daniel Wise’s college football career. And the redshirt senior defensive tackle at the University of Kansas would like to cram as many successes as possible into them. "Our goal is to go to a bowl game and be the best that we can be for KU fans, KU nation and all that," Wise said. By Benton Smith

If you’re a college football coach fighting for your job, you have to take at least a little comfort in knowing that if all the players you have in camp qualify academically and stick around, you’ll have a roster stocked with 47 juniors and seniors recruited on scholarship, as compared to 25 freshmen and sophomores.

In an alternative, quintessential version of this spring, the Kansas football team would have had enough healthy, functional offensive linemen to scrimmage routinely without fear of losing more blockers up front to injuries. As most observers know by now, though, few scenarios involving the ever-struggling Big 12 program play out ideally. By Benton Smith