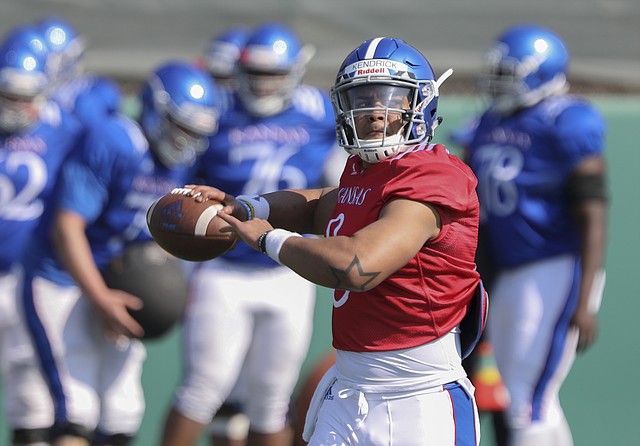 Ahead of Saturday’s season opener, Kansas football head coach David Beaty has a message for his counterpart at Nicholls State, Tim Rebowe. It came when asked during his Tuesday press conference to elaborate on his declaration the night before on his Hawk Talk radio show that backup quarterback Miles Kendrick will play this week, as well as in “every game” this season. By Benton Smith

Three and out after three and out. The quarterback seeing stars, but not open stars slipping behind the secondary, stars in his eyes from getting slammed to the turf yet again. Bubble screens bursting, blown up by a lack of blocking, the ball floating in the air too long or both.

Miles Kendrick first met the man who will mold him into whatever type of quarterback he becomes for the University of Kansas football program late this past year. By Benton Smith

Every time Kansas quarterbacks arrive at Anderson Family Football Complex for their position group meeting the day following a spring practice, they are greeted with a sheet of paper. While each displayed digit carries significance regarding a QB’s play, the figures that grab head coach David Beaty’s attention quickest deal with completion percentages. By Benton Smith

Whether it was Peyton Bender or Carter Stanley playing quarterback for Kansas this past season, more often than not passing plays failed to produce their desired results. Whatever the factors, off-season QB improvements — or perhaps naming a different starter entirely — will be essential to putting a more adequate KU offense on the field this coming fall. By Benton Smith