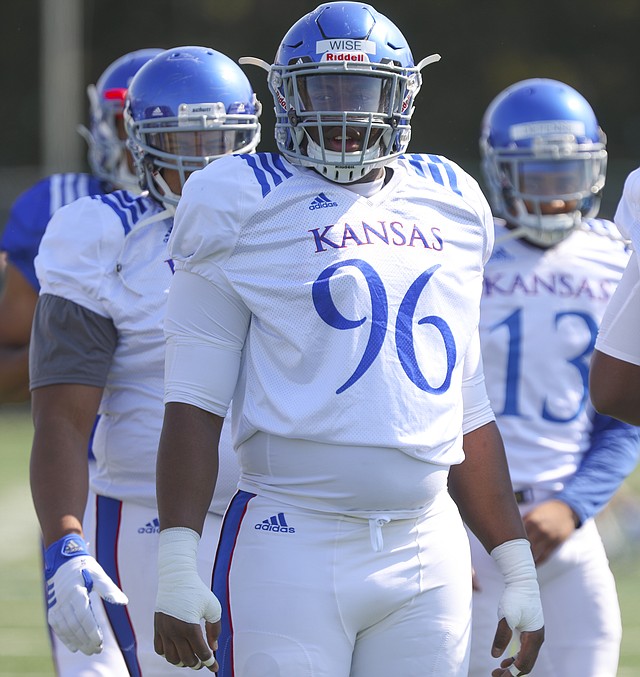 Kansas defensive tackle Daniel Wise and other members of the defense watch over a drill during practice on Tuesday, April 10, 2018.

Most high-level student-athletes have enough going on as undergraduates that the hiring of an athletic director might not resonate until they interact with their head coach’s boss face to face. However, Kansas football senior Daniel Wise happened to know plenty about Jeff Long before KU chancellor Douglas Girod ever announced his hiring. By Benton Smith

Actual practices won’t begin until early August, but a crucial stretch of preparation leading up to preseason camp began this week for University of Kansas football players. By Benton Smith

Though they play for a team often overlooked on the national landscape, Kansas football redshirt seniors Daniel Wise and Joe Dineen won’t go unnoticed in their final year with the Jayhawks. By Benton Smith

Miles Kendrick first met the man who will mold him into whatever type of quarterback he becomes for the University of Kansas football program late this past year. By Benton Smith

Daniel Wise considered innumerable factors this past winter while scrutinizing the benefits and drawbacks of foregoing his final college football season in order to enter the NFL Draft. “Other than personal growth and to get stronger and wiser and all that stuff,” Wise said, “I felt like something was missing. I didn’t want to go out with my college career the way it went out.” By Benton Smith