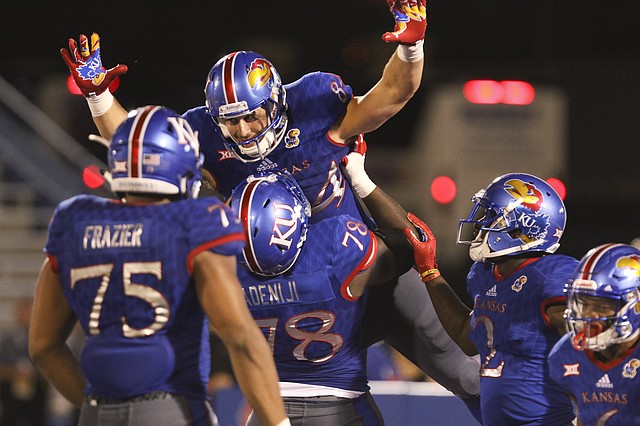 After the seven-round NFL Draft concluded Saturday without former Kansas tight end Ben Johnson hearing his name called, the pro prospect from nearby Basehor discovered there was an organization interested in giving him a shot.

Even before this past Kansas football season began, left tackle Hakeem Adeniji suffered an injury — a torn labrum in one of the sophomore offensive lineman’s shoulders — that would make his already strenuous job even more difficult. The 6-foot-4, 290-pound blocker from Garland, Texas, didn’t consider the setback in preseason camp a reason to take time off. Nor did Adeniji decide he’d had enough the first week of October, when the exact same trauma popped up in his opposite shoulder. By Benton Smith

Other than the players and coaches who occupy the Kansas locker room, there might not be a single person who follows college football who expects the Jayhawks to beat Oklahoma. Earlier this week, KU chancellor Douglas Girod endorsed third-year head coach David Beaty and his long-term vision for the program. So there couldn’t be less pressure on the home team, considered a five-touchdown underdog. By Benton Smith