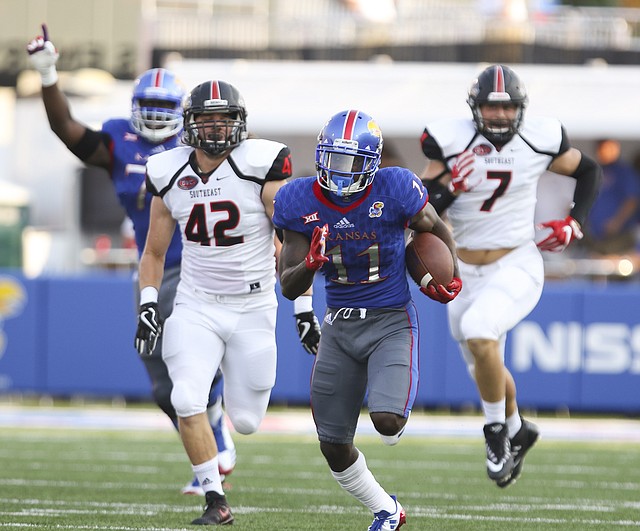 Kansas wide receiver Steven Sims Jr. (11) tears up the sideline on a touchdown run during the first quarter on Saturday, Sept. 2, 2017 at Memorial Stadium.

The most experienced and prolific skill player on the Kansas football roster entering this season, Steven Sims Jr. expects the Jayhawks to show significant progress offensively in the months ahead. Those who follow college football foresee Sims, a senior receiver, playing a starring role regardless. By Benton Smith

The most experienced skill player on the Kansas football roster, Steven Sims Jr. knew his hobbled right ankle would limit his effectiveness this past Saturday, but he wanted to give it a shot and see if he could overcome the pain enough to play. However, both Sims and his head coach felt optimistic Tuesday about the team’s leading receiver getting back on the field for KU’s road opener at Ohio. By Benton Smith

Steven Sims and Dorance Armstrong, a pair of Houston natives, took the field for KU football on Saturday against Southeast Missouri State. They had more than the game on their minds. By Scott Chasen