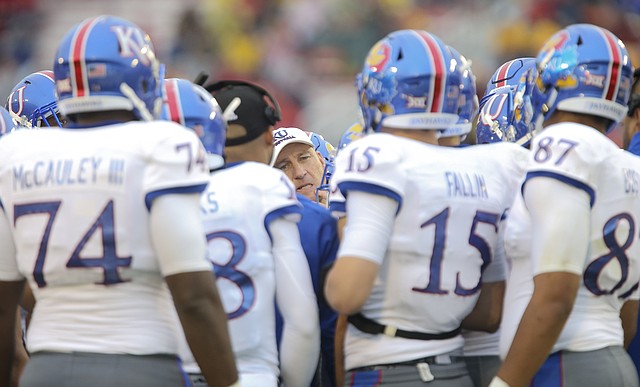 Appreciative of chancellor's endorsement, Beaty says KU football in 'middle' of his plan

According to David Beaty, he didn’t expect Monday to have University of Kansas chancellor Douglas Girod declare support for him as the football coach, while doing the same for athletic director Sheahon Zenger and the current direction of the program. Beaty unsurprisingly said at his weekly press conference Tuesday Girod’s endorsement “means a ton” to the him, his staff and the players. By Benton Smith

Nearing the conclusion of his third year, head coach David Beaty said following the Jayhawks’ home loss to Baylor the Bears were in “nowhere near” as bad a situation in the first year under coach Matt Rhule as KU was two seasons earlier, when he took over. According to Beaty, the team he coached in 2015 season was down “30-plus scholarships.” So how many scholarship players is Kansas up to right now? The Jayhawks’ head coach declined to answer that question Monday. By Benton Smith

Beaty: Jayhawks have 'great opportunity' in prime time at No. 4 TCU

In its early years, long-running T.V. variety series Saturday Night Live branded its cast members as “the not ready for prime time players.” Those who follow the Kansas football program closely might say the same of the Jayhawks, particularly after back-to-back debacles — against Texas Tech and at Iowa State. Third-year head coach David Beaty would disagree. By Benton Smith