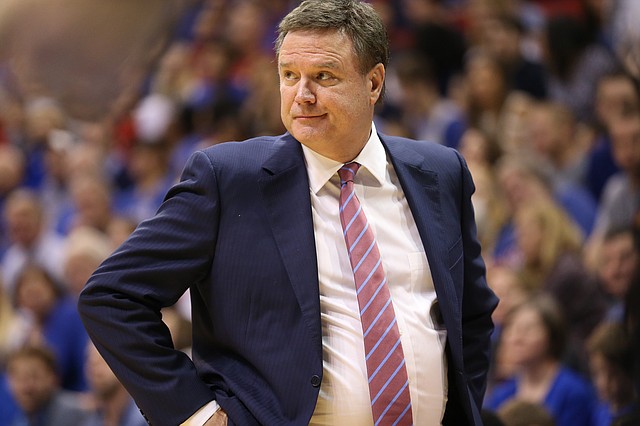 Kansas head coach Bill Self casts a look at his players during the second half on Friday, Nov. 24, 2017 at Allen Fieldhouse.

'We good?' 'Always': Texts between Self, fixer presented in college basketball corruption trial

Although a former Adidas consultant testified in federal court on Monday that he never told University of Kansas basketball coaches about paying the families of players, text messages between him and KU coaches Bill Self and Kurtis Townsend show they were aware of some sort of involvement in recruiting.

It’s anyone’s guess how much longer the FBI’s investigation into corruption in college basketball will last, but we now have concrete evidence that the probe has changed the game. By Matt Tait

Self, Zenger react to college basketball recomendations with wait-and-see approach

Kansas basketball coach Bill Self and athletic director Sheahon Zenger offered little in the way of specific reactions to the recommendations into fixing college basketball dished out early Wednesday morning by The Commission on College Basketball. By Matt Tait

Kansas basketball coach Bill Self is smart enough to sense what's happening with KU's beloved fan base, even though he has spent very little time interacting with them of late and spends basically no time on social media sites and message boards where thousands of Jayhawk fans are happy to let their feelings be known. By Matt Tait

KU coach Bill Self: 'We could become deep' in a hurry

Kansas basketball coach Bill Self on Thursday offered updates on three Jayhawks who have yet to play a minute for the team this season. He followed them up with an explanation for why constant questions about Sam Cunliffe, Billy Preston and Silvio De Sousa were worth addressing week after week, as all three continue to strive to get back on the court. By Matt Tait