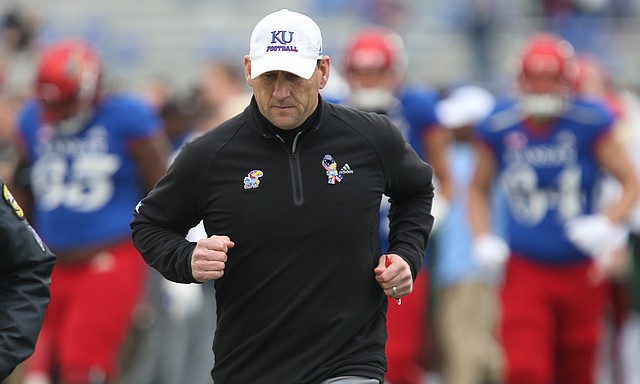 It’s time to shelve all other building projects to put all efforts on an expansion that won’t take long and just might supply the motivation fuel the Kansas football team will need to overachieve in 2018.

The man who hired David Beaty to coach the University of Kansas football program lost his job Monday.

Tom Keegan: Does winning in football mean as much as it once did to Kansas Athletics?

Of all the conversations between new University of Kansas chancellor Douglas Girod and seventh-year athletic director Sheahon Zenger, the one I most would have liked to hear: The chancellor asking the AD some form of the question on the minds of many: You fired Turner Gill with a 5-19 record and Charlie Weis at 6-22. What makes 3-31 better than 5-19 and 6-22?

Two days after his team dropped a home game to previously winless Baylor, extending the current Kansas football losing streak to eight games, head coach David Beaty wasn’t feeling concerned about the status of his contract. “I’m not at all. I feel great,” Beaty said Monday morning on the Big 12 coaches media teleconference, when asked about his future moving forward, now close to 11 months after signing a contract extension with KU that runs through the 2021 season and includes a $3.2 million buyout. By Benton Smith