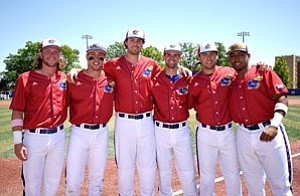 The KU baseball program's six seniors pose together one final time before the home finale Sunday, May 14 at Hoglund Ballpark. KU lost the series finale to K-State, 10-3, but won the series 2-1, giving the Jayhawks their first series win over the Wildcats since 2014.

The Kansas baseball team may have lost the series finale with K-State, 10-3 on a sunny Sunday at Hoglund Ballpark, but the end of the Jayhawks' eight-game winning streak did not leave them feeling like it was the end of the world thanks to victories in the first two games of the series, which gave KU its first series win over the Wildcats since 2014. By Matt Tait