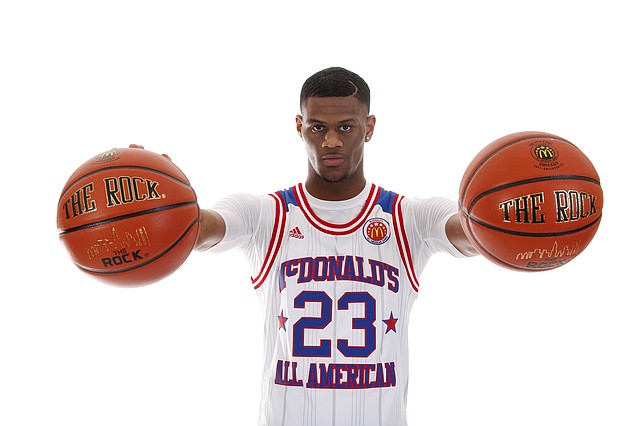 Kansas commitment Billy Preston, the No. 8 player in the Class of 2017 according to Rivals.com, at this year's McDonald's All-American Game in Chicago.

Will forward Billy Preston be KU's next great freshman?

In what has become an annual ritual around Lawrence and Jayhawk Nation, the arrival of June means all eyes turn to the next incoming freshman who ranks highest on the recruiting boards. In this case that's 6-foot-10 forward Billy Preston. But what exactly he can and will do for the Jayhawks during the 2017-18 season remains unknown. By Matt Tait

A few days after Kansas lost to Oregon in the Elite Eight, KU signee Billy Preston stood in the concourse of the United Center, where he is set to play Wednesday in the 40th annual McDonald’s All-American Game. KU’s defeat still feels like a fresh wound, but the 6-foot-10, 230-pound Preston was looking forward. He’s confident that the loss to Oregon can be the building block for an even brighter future in Lawrence. “It was a great season, we fought hard, that showed we had a lot of fight and heart inside of us,” said Preston. “With that being said, I want to bring that same competitiveness next year.” By Eli Kaberon