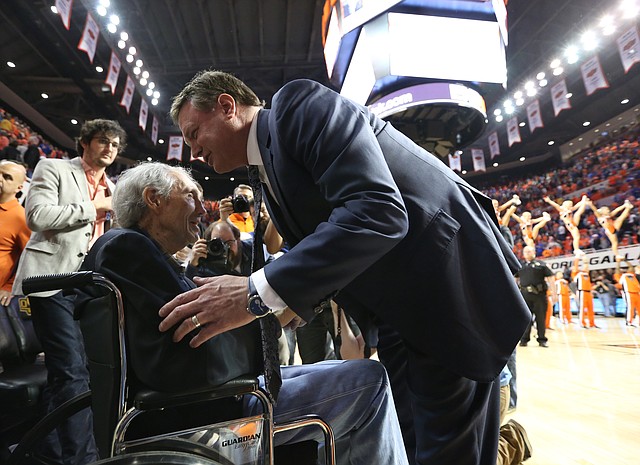 The wait is over for former Oklahoma State basketball coach Eddie Sutton, who on Saturday morning was announced as one of nine members of the 2020 class headed into the Naismith Memorial Basketball Hall of Fame. By Matt Tait

KU coach Bill Self to be honored by OSU Alumni Association

His goal, these days, is to emerge victorious at least twice a year in his matchups with his alma mater. But that did not stop Oklahoma State University’s Alumni Association from honoring Bill Self as Distinguished Alumni Award recipients for 2018. By Matt Tait

Bill Self on path to Hall of Fame: I had the 3 best mentors in basketball

Thanks, but first a phone call. That was the general thought and feeling that overtook Kansas coach Bill Self when he learned this spring that he had been elected into the Naismith Memorial Basketball Hall of Fame’s Class of 2017. By Matt Tait

Wow, Eddie Sutton does not look like he's doing good at all. :(

Eddie is a legend. I respect his coaching legacy. Good for Bill to honor him. Eddie was tough, and Bill bases his definition of 'tough'on Eddie's and Hank Iba's version. Rock Chalk.