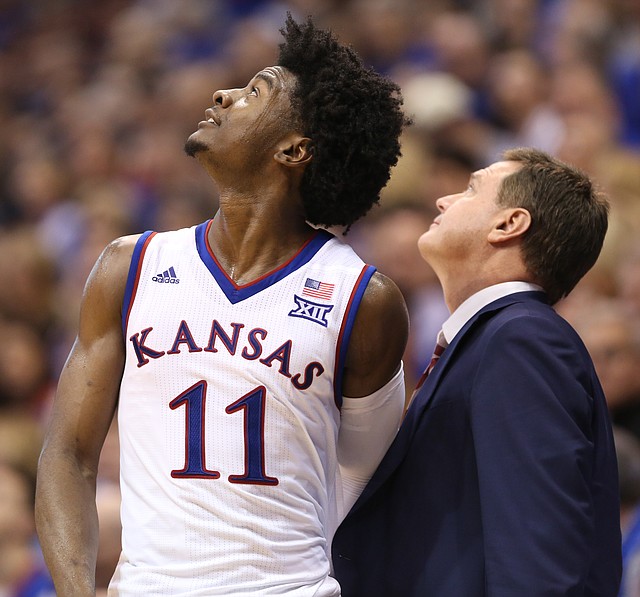 Kansas guard Josh Jackson (11) and Kansas head coach Bill Self watch the replay of a foul called on Jackson during the second half, Saturday, Jan. 21, 2017 at Allen Fieldhouse.

Was this year's NBA draft the last to be dominated by college freshmen?

Young talent dominating draft night is nothing new in the NBA. The draft has been trending this way for years, with team executives preferring to pick potential and invest in long-range visions over taking proven but older players from the college ranks. However, there are plenty of people who believe this latest surge of one-and-done selections might have been the beginning of the end. By Matt Tait

With freshman guard Josh Jackson set to return from a one-game suspension, Kansas men’s basketball coach Bill Self was asked on Monday morning’s Big 12 coaches teleconference if he, for any reason, had seen or known of anything at all that might keep Jackson from playing for the Jayhawks moving forward. “Hell no,” Self said. “OK? That answered your question.”By Matt Tait

Whenever a team rips off 18 consecutive victories as the Kansas men’s basketball team has since dropping the season opener back in November, there are a number of elements responsible for the run. By Matt Tait