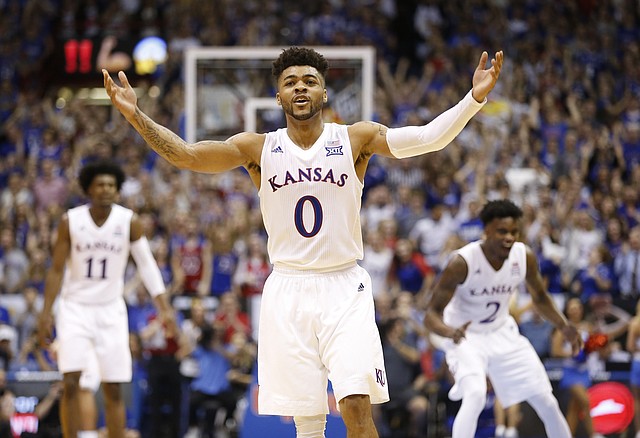 Kansas guard Frank Mason III (0) raises up the Fieldhouse during the Jayhawks' comeback run in the second half, Monday, Feb. 27, 2017 at Allen Fieldhouse.

The Sacramento Kings struck again, selecting yet another Kansas basketball player, this time reigning national player of the year Frank Mason III at No. 34 overall in the second round of Thursday's NBA Draft. By Matt Tait

Kansas senior Frank Mason III has put himself in position to become KU’s first John R. Wooden and/or Naismith award winner since Danny Manning in 1988 and the first ever to play for Self. By Matt Tait

The West Virginia comeback it was not, but there sure were moments when it looked — and sounded — like it. After a sloppy and sluggish 30 minutes of basketball against last-place Oklahoma, No. 1 Kansas woke up in a big way and buried the Sooners, 73-63, with a suffocating 31-9 surge to the finish line on Senior Night. By Matt Tait