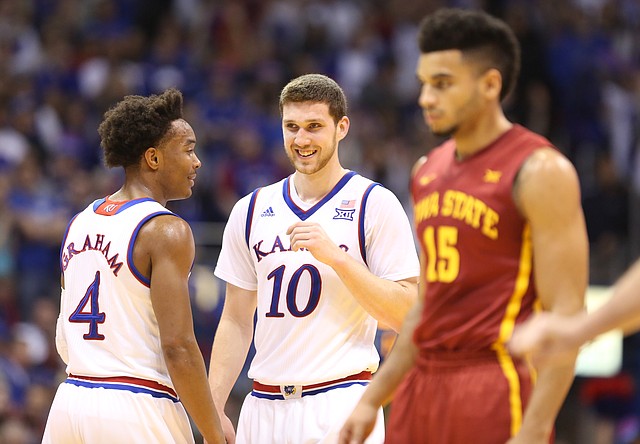 Kansas guard Sviatoslav Mykhailiuk (10) has a laugh with Kansas guard Devonte' Graham (4) during the first half against Iowa State, Saturday, Feb. 4, 2017 at Allen Fieldhouse.

He was seated in the stands at Barclays Center in Brooklyn, New York, with his agent, coach from Ukraine, parents and girlfriend, when former Kansas guard Svi Mykhailiuk heard his name called out in this year’s NBA Draft. By Matt Tait

Despite losing Frank Mason III and Landen Lucas from last year's 31-5 squad, the Kansas men's basketball team returns a pair of important veterans, in Devonte' Graham and Svi Mykhailiuk, who should be able to pick up where Lucas and Mason left off a year ago. By Matt Tait

Having spent most of the summer playing with his national team in Ukraine, KU senior-to-be Svi Mykhailiuk is expected to meet up with the Jayhawks in Italy in time for Kansas' four exhibition games abroad during the first week of August. By Matt Tait

Svi Mykhailiuk announces he will return for senior season

Svi Mykhailiuk’s days of draining 3-pointers at the University of Kansas aren’t over just yet. The junior from Ukraine announced Wednesday his intentions to return to KU for his senior season, instead of keeping his name in the 2017 NBA Draft. By Benton Smith