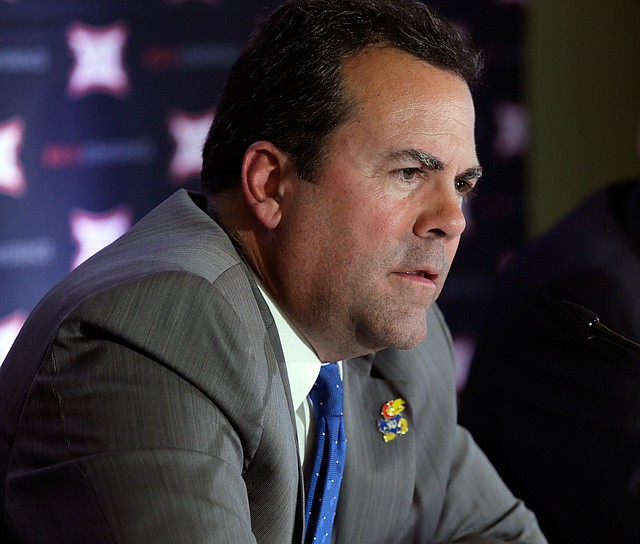 Former University of Kansas athletic director Sheahon Zenger won’t be leaving Lawrence anytime soon. On Friday, Zenger told the Lawrence Journal-World that he plans to join the coaching staff for the Free State football team. Zenger will serve as the linebackers coach for the Firebirds, who made it to the 6A quarterfinals last fall.

Zenger doesn't like 'victim' description for KU, expresses complete confidence in Self, staff in wake of college basketball scandal

Count KU basketball coach Bill Self and athletic director Sheahon Zenger among those also not thrilled with the description of the University of Kansas as a "victim" in the widening college basketball scandal.

Majority of KU AD's $700K salary to be paid by private funds; KU says negotiations began more than 6 months ago

Kansas Athletics Inc. — as opposed to state dollars — will pay the majority of University of Kansas athletic director Sheahon Zenger’s salary, which was recently raised to $700,000 and extended for another four years.

Amid allegations of unfair treatment, KU seeks to meet with father of women's basketball player; Zenger speaks on discipline policies

Kansas Athletics officials said Tuesday they want to meet with the father of a KU women’s basketball player who alleges she has been mistreated by the university, but the father thus far has not agreed to a meeting.

In recent weeks, members of the highly-ranked University of Kansas men’s basketball team have made national headlines due to off-court incidents. In an interview with the Journal-World on Friday, KU’s top athletics official assured that the KU basketball team is not out of control and said administrators' “no comment” stance on the alleged incidents was required.