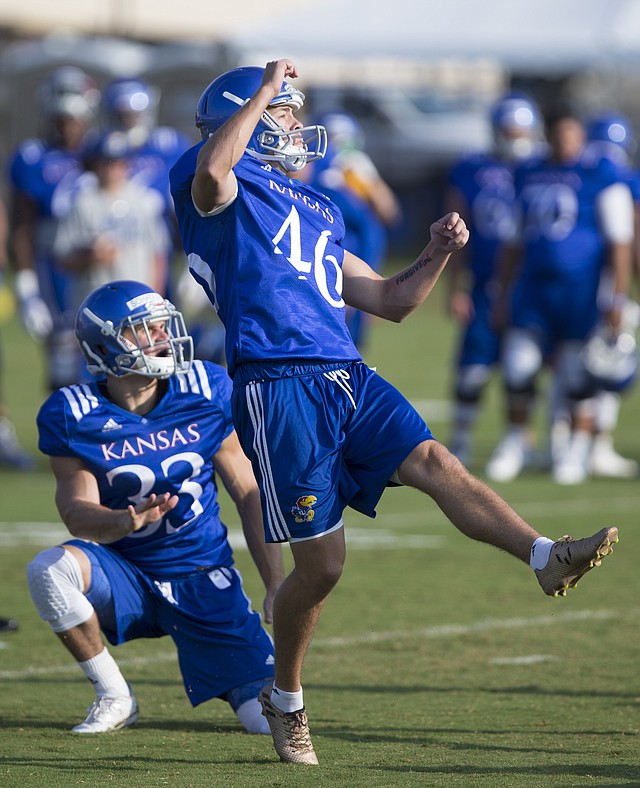 Kansas kicker Liam Jones watches one of his kicks during practice with the special teams unit on Friday, Aug. 11, 2017 at the practice fields west of Hoglund Ballpark.

The starting quarterback battle isn’t the only competition up in the air for the Kansas football team. Shane Jackson

“I have always been a special teams guy,” Miles professed recently. His regard for that third phase of football went up a notch roughly 20 years ago, thanks to the time he spent working with Dallas’ special teams coach at the time, Joe Avezzano. By Benton Smith

Somehow, the same specialist who badly missed a 40-yard field goal from the left hash in the KU football spring game and sent a 39-yarder from the middle of the field wide right — with no real rush presented by the defense — turned into the program’s best placekicker in at least a decade. “I’m not sure, going into fall camp,” KU head coach David Beaty said of Gabriel Rui, “if anybody would have gave him the chance to be the starter, and all he did was keep his head down and just keep working.” By Benton Smith