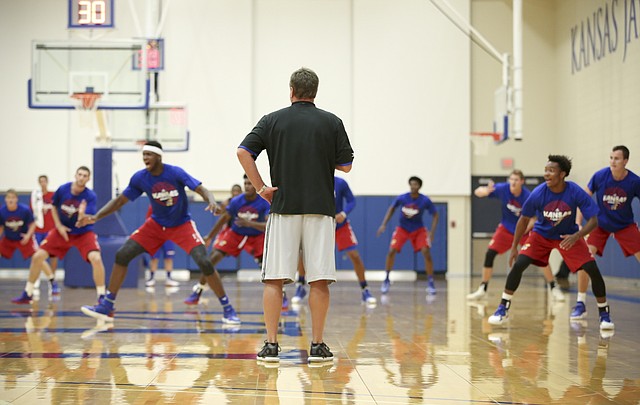 Kansas head coach Bill Self watches as the players rapidly shuffle across the court during Boot Camp in the practice gym on Friday, Sept. 23, 2016 just after 6 a.m.

The process to replace two longtime Kansas Athletics sports performance employees is underway and KU Athletic Director Jeff Long hopes to have at least one hire made in the next two weeks. By Matt Tait

Jayhawks bracing for another Bill Self boot camp

It’s boot camp time for the Kansas basketball program, the two-week conditioning grind that serves as a way to test and shape the minds of the Jayhawks as much as their bodies. By Matt Tait

With this year’s Late Night scheduled earlier than ever — 6:30 p.m., Sept. 30 at Allen Fieldhouse — the annual exhaustion known as boot camp will begin earlier, as well, at 6:15 a.m. Monday, when Bill Self and his team meet before the sun rises to put in a full day’s work before many people get out of bed. By Matt Tait

Jayhawks loaded but pieces still have to 'fit'

Kansas basketball coach Bill Self said at KU's recent media day that the 2016-17 Jayhawks have the chance to be more talented and perform better in the biggest moments than last year's team as long as the individual pieces fit together the way he believes they can. By Matt Tait