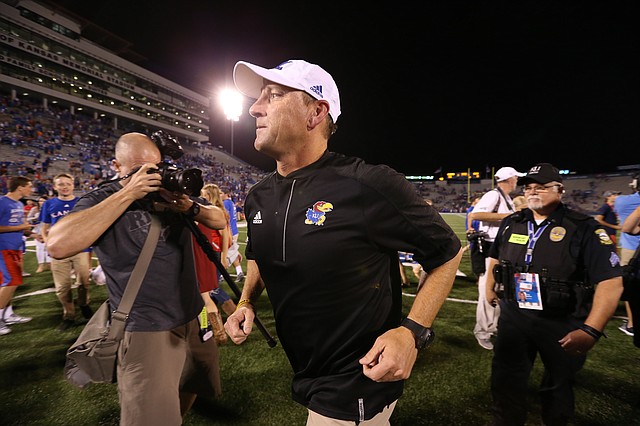 Kansas head coach David Beaty runs off the field with his first win after beating Rhode Island 55-6 on Saturday, Sept. 3, 2016 at Memorial Stadium.

Now that David Beaty has put in two-plus years worth of work into a massive reclamation project as the head football coach at the University of Kansas, one area where he can see real progress is on the scholarship front. By Benton Smith

Tom Keegan: Zenger had no choice but to extend his football coach

It’s Kansas athletic director Sheahon Zenger’s job to make decisions with his head, ones that are best for the football program, not easiest to explain to the fan base.

KU had 'nightmare' sequence in 1st half of win

For all the excitement in the air at Anderson Family Football Complex Saturday night following his first victory as Kansas head coach, David Beaty wasn’t about to give his team a free pass. By Benton Smith