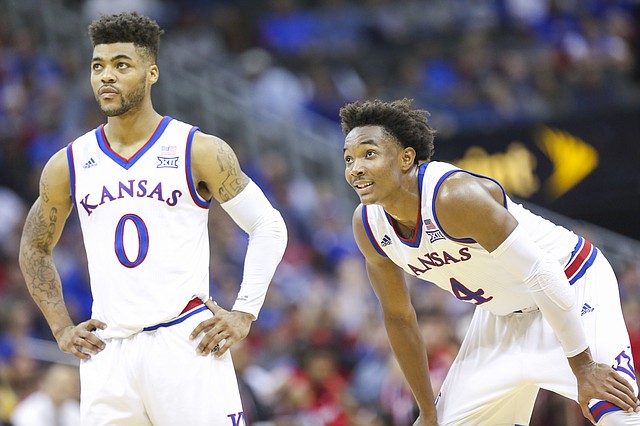 Finding his voice: How Devonte' Graham became one of the best leaders in Kansas basketball history

It remains to be seen what distinctions KU senior Devonte’ Graham leaves Kansas with when his stellar four-year career comes to an end sometime in the next few weeks. But regardless of what accolades he adds to his sparkling resume before he heads off to face his next challenge, Graham likely will be remembered first and foremost as a leader.By Matt Tait

Kansas guards Frank Mason III and Devonte' Graham again took center stage at the team's annual banquet on Tuesday night, one to collect another trophy and the other to talk about his decision to return to try to win one of his own. By Matt Tait

A point beside the point on point in recent NCAA tournaments

Searching for NCAA tournament patterns ranks high among futile activities because as soon as it seems one is emerging, it fades to black.

Rowing upstream with a defense that gave up way too many easy baskets and routinely got beat off the dribble, Kansas coach Bill Self a few weeks ago challenged guards Frank Mason III and Devonte’ Graham to lead the charge to fix the KU defense. While all three will tell you that there remains plenty of room for growth and improvement, Self believes things have gotten better. By Matt Tait