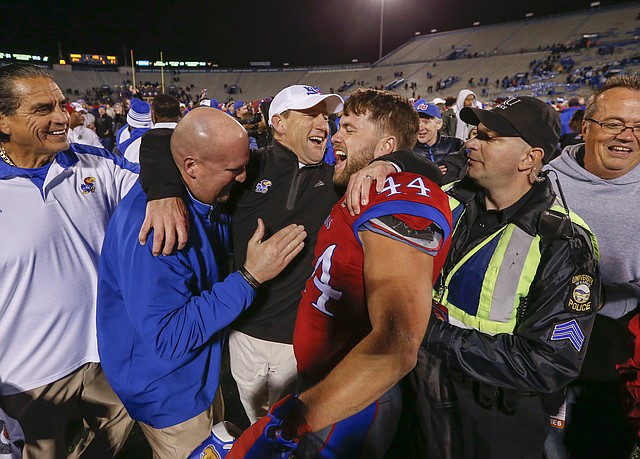 Face it and embrace it: The momentum for Kansas football feels more real now than at any moment in the post-Mangino/Reesing years. By Tom Keegan

Less than a month after earning his first conference victory, second-year Kansas football coach David Beaty learned the university would like to keep him around. Beaty signed a two-year contract extension, KU announced Monday, that runs through the 2021 season. The new deal also increases Beaty’s annual salary. By Benton Smith

Party's over: Jayhawks quickly turn focus to finale at K-State

David Beaty had no problem allowing his Jayhawks — some of whom had gone just more than two years without beating a Big 12 or FBS foe — to soak in the favorable vibes in the wake of a rousing win over Texas. The coach likely derived even more confidence on that front upon witnessing many in the locker room discussing the upcoming season finale before the party had as much as slowed down. By Benton Smith