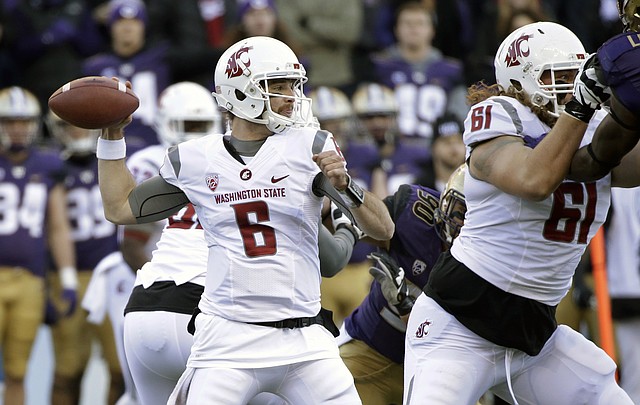 The Kansas football program made legitimate progress at the end of the season. KU went 1-2 against its final foes, Iowa State, Texas and Kansas State, with an average score of Opponents 29, Kansas 22. A year ago, against the same three schools, the numbers were Opponents 47, Kansas 16. Much offseason work remains to keep the arrow pointing upward. By Tom Keegan

During an official visit to KU, former Washington State quarterback Peyton Bender watched the Jayhawks upset Texas in overtime at Memorial Stadium. Now Bender hopes to be a part of such wins for Kansas in the future. By Benton Smith

Trying to re-build the Kansas football program currently qualifies as a never-ending endeavor. So while second-year head coach David Beaty and his staff attempt to get their players to execute a game plan worthy of upsetting Texas on Saturday in the Jayhawks’ home finale at Memorial Stadium, they’ll also spend portions of the weekend pitching KU to a former Pac-12 quarterback. By Benton Smith