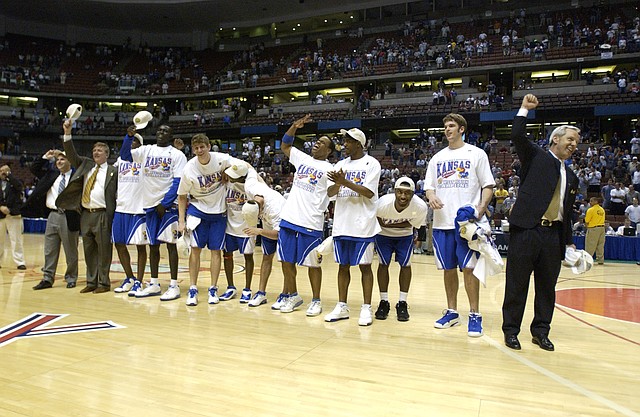 2002-03 — The Jayhawks lost senior-to-be Drew Gooden to the NBA Draft. But the play of seniors Kirk Hinrich (17.3 ppg) and Nick Collison (18.5 ppg) and the emergence of sophomores Aaron Miles, Keith Langford and Wayne Simien helped Kansas get all the way to the 2003 title game. The second-seeded Jayhawks lost six regular season games, and early in the Big 12 tourney, but reached the Final Four for a second straight season by going through a bracket that included tough wins over No. 3 seed Duke and No. 1 seed Arizona. From there, the Jayhawks blitzed Dwyane Wade and Marquette in the Final Four before falling to Syracuse, 81-78, in the national title game. The loss to Carmelo Anthony and the Orangemen wound up being the last coached by Roy Williams at Kansas, who finished the season 30-8.