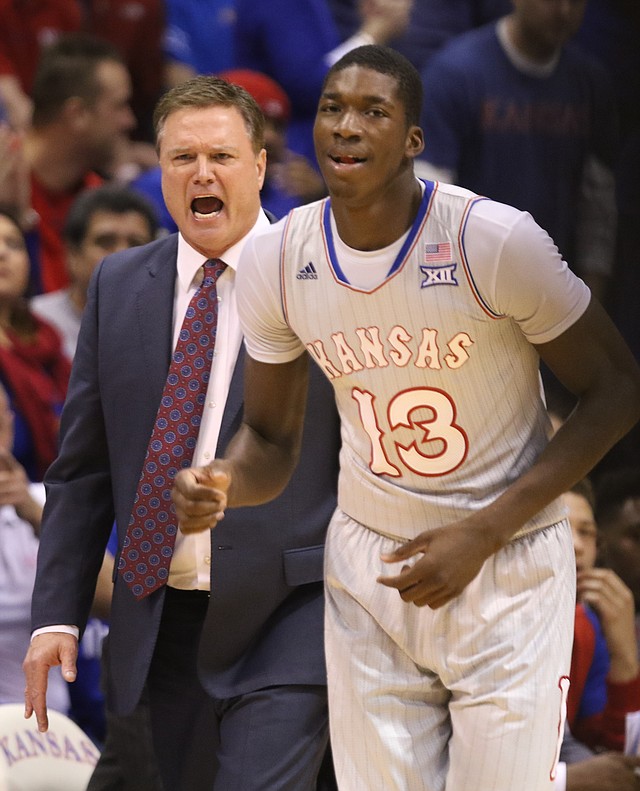 Kansas head coach Bill Self gets in the ear of Kansas forward Cheick Diallo (13) during the first half, Monday, Feb. 15, 2016 at Allen Fieldhouse.

After playing well, measuring well and interviewing well at last week’s NBA Combine, Kansas University freshman Cheick Diallo proclaimed to ESPN.com and CBSSports.com reporters he would be signing with an agent and keeping his name in the June 23 draft. The 6-foot-9 Mali native’s decision to turn pro certainly did not surprise Jayhawk coach Bill Self. By Gary Bedore

Kansas University freshman Cheick Diallo, whose 7-foot-41⁄2 wingspan measured second longest of all players at this week’s NBA Combine, scored 18 points off 7-of-10 shooting with four blocks and four rebounds, in his first official scrimmage at the pre-draft extravaganza in Chicago. By Gary Bedore

Any college basketball player with even a remote chance of earning an invitation to the NBA pre-draft combine would be a fool to do anything other than precisely what Cheick Diallo did Monday.

What if Diallo had dunked it?

The wildly entertaining dunks of Zach LaVine and Aaron Gordon in Saturday’s NBA Slam Dunk contest would likely have been erased from the minds of hoop fans Monday night ... had Cheick Diallo’s attempt with 29 seconds left in Kansas University’s 94-67 victory over Oklahoma State gone down. By Gary Bedore